Exuma – Man for All Seasons 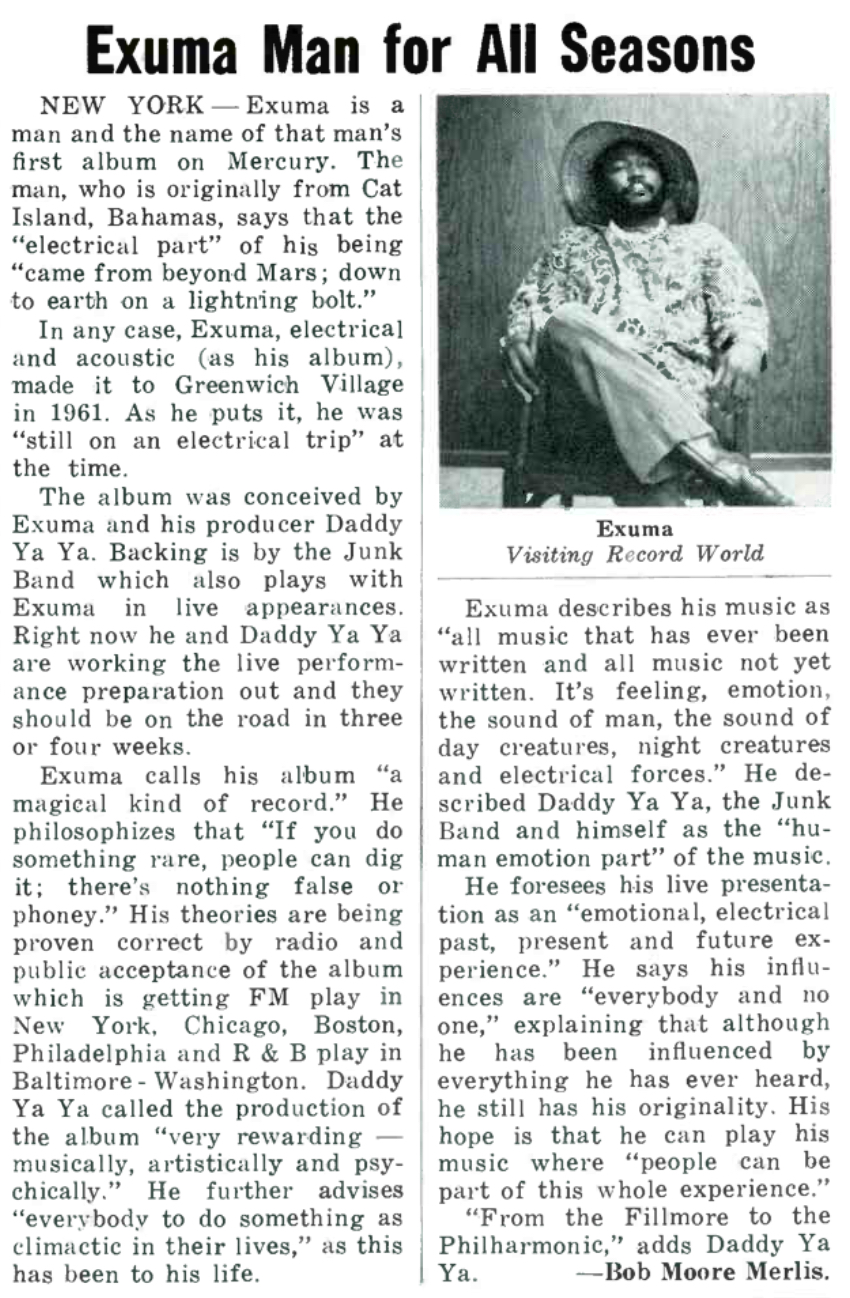 Exuma Man for All Seasons NEW YORK - Exuma is a man and the name of that man’s first album on Mercury. The man, who is originally from Cat Island, Bahamas, says that the “electrical part” of his being “came from beyond Mars ; down to earth on a lightning bolt.” In any case, Exuma, electrical and acoustic (as his album), made it to Greenwich Village in 1961. As he puts it, he was “still on an electrical trip” at the time. The album was conceived by Exuma and his producer Daddy Ya Ya. Backing is by the Junk Band which also plays with Exuma in live appearances. Right now he and Daddy Ya Ya are working the live performance preparation out and they should be on the road in three or four weeks. Exuma calls his album “a magical kind of record.” He philosophizes that “If you do something rare, people can dig it; there’s nothing false or phoney.” His theories are being proven correct by radio and public acceptance of the album which is getting FM play in New York, Chicago, Boston, Philadelphia and R & B play in Baltimore - Washington. Daddy Ya Ya called the production of the album “very rewarding — musically, artistically and psychically.” He further advises“ everybody to do something as climactic in their lives,” as this has been to his life. ([IMAGE] Exuma Visiting Record World). Exuma describes his music as “all music that has ever been written and all music not yet written. It’s feeling, emotion, the sound of man, the sound of day creatures, night creatures and electrical forces.” He described Daddy Ya Ya, the JunkBand and himself as the “human emotion part” of the music. He foresees his live presentation as an “emotional, electrical past, present and future experience.” He says his influences are “everybody and no one,” explaining that although he has been influenced by everything he has ever heard, he still has his originality. His hope is that he can play his music where “people can be part of this whole experience.” “From the Fillmore to the Philharmonic,” adds Daddy YaYa. — Bob Moore Merlis.